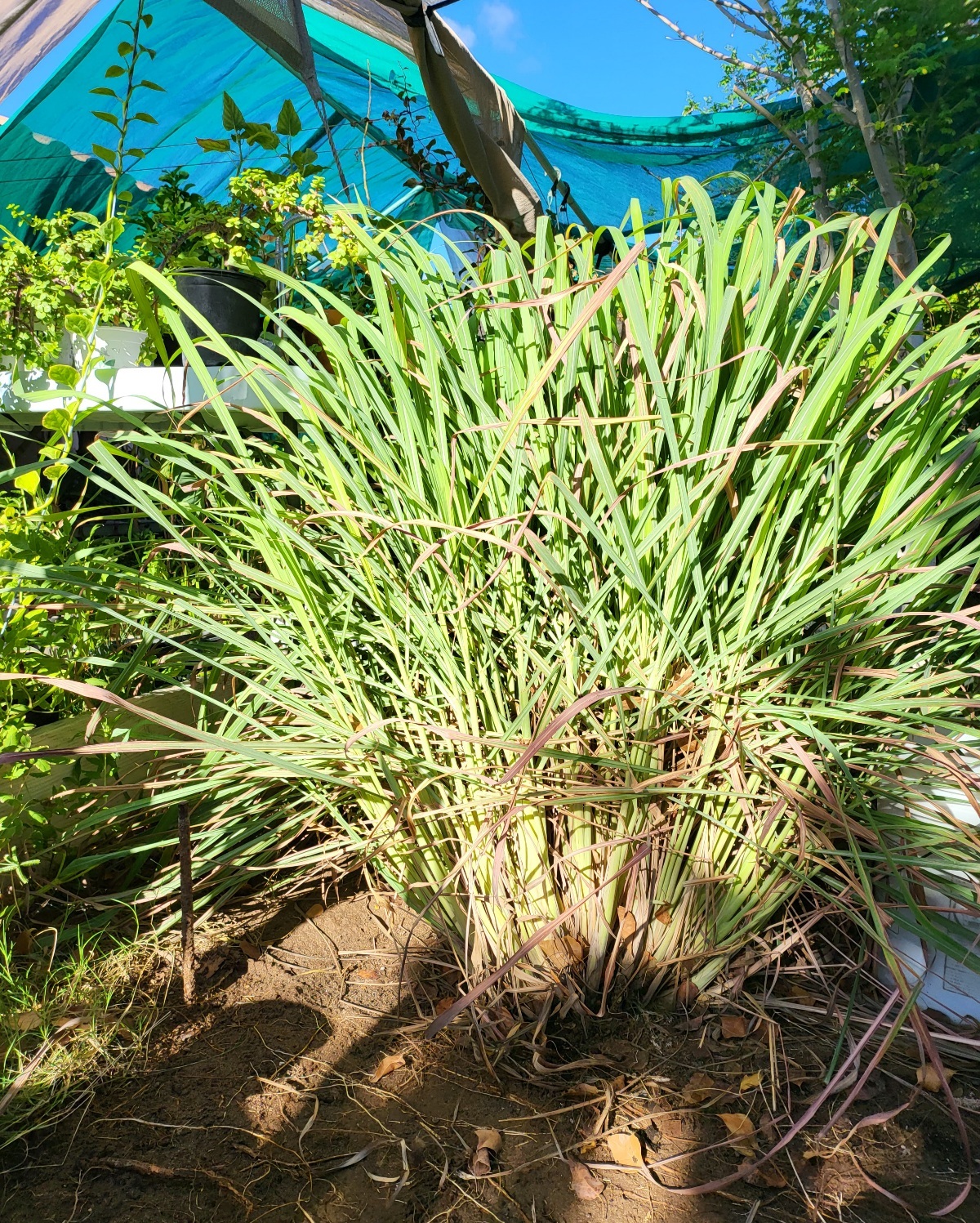 Lemongrass is a hardy plant

Lemongrass does well from zone 5a all the way to zone 10a, meaning they will grow in any type of soil as long as you water them because they love water. The more the water the more they plump up, some could be at least 1.5″ in diameter. Because we live where the sun is up roughly about 99.9% of the time mid-February for the first timer.

Asian family uses lemongrass a lot. We use them in boiled soup, stir fry, and curry soup. It can also be eaten raw if you like the spicy taste. Plus it can be dried up and used as a tea or fresh. Try my moringa and ginger tea too it is refreshing. And every year I harvest my lemongrass. After that, I replant some stalks back, either in the same area or another area. Up to you.

Using one stalk without the blade, cut it into, maybe 5″ inches or so, and smashed it with a blunt object, hammer, or meat tenderizer whatever your fancy. I use a pestle it’s easier for me. Or carefully pick 3 blades, bend it into 4″ inches a couple of times and tie it off with the ends of the blades. Viola, you got a bow of lemongrass blades ready to be put into your boiled soup.

Grabbed a few stalks of lemongrass, mince, and fried it in oil until crispy to a golden brown then take it out of the oil, let it cool, use it as garnish and store it in the fridge for future use. You can use the fresh minced lemongrass in your curry as well or use it in your stir fry.

Hmong people are a crazy bunch. We dip the root end of the lemongrass in salt and eat it with rice and water! yeah, crazy right? But, I tell ya it is so good. Well, okay depends on who you asked I guess. My husband the Mexican thinks I’m crazy. LOL.

Today, I will be showing you guys how to thin out lemongrass then we’ll do a lemongrass transplant more like replanting. As I said earlier, if you follow me this far you know that last summer we went to Paris, France and while we were away for three weeks my sprinkler system stopped working and my garden burnt up. So sad, I know, including my lemongrass. Let’s move on.

This is what I have:

Don’t forget your, cap, sunglass, and tanning lotion. Just kidding. SPF Sunblock, any SPF up to 100+. I swear some people have no sense of humor.

When is the best time to harvest? Toward the end of summer in October here and it should be the same time for replanting as well here in the desert southwest Yuma, AZ zone 10 a.

Have a square shovel preferably but, not necessarily, nearby so you can put the shovel into the center of the lemongrass bush firmly step on your shovel until you break to the soil, and lift it away gently away from the other half. Repeat that for the other side. If you have a little bush and soft soil you can just lift the whole bush up with little trouble with your shovel.

Lemongrass is pretty hardy. They can take some beating. I have bags and bags of them from just one bush. However, I’m not so lucky this year. While the heat came into my garden and without water to cool his touch my lemongrass was scorched.

Yesterday, I thinned mine out and I have some that I want to plant in a different area this time.

The first thing you want to do is wear some heavy-duty gloves because the lemongrass blades are sharp. I don’t know how many times I’ve been sliced by them. Pull the lemongrass stalk out one at a time right from the root ball.

After harvesting the lemongrass

Now that was easy. Did anyone get sliced? Go wash it off with some soapy lukewarm water. Then come back I’ll wait. Oh, good that was fast let us move on.

While you were pulling harvesting and cleaning your lemongrass I got some from my yard that I got yesterday. I have stalks that I let grow for a couple of years, and new shoots were growing from the stalk itself. I think It’s perfect to plant it this way because you know that it’s already growing.

Examine your stalk pile and chooses which stalk you want to replant. Look for one that has little shoots coming out from it. If your lemongrass is a first-year harvest you will not get new shoots growing like the image above. Pick a stalk that is healthy enough and use that one. Once you picked out your stalks you want to replant and cut the roots off, just enough so that you have about 7mm of original root on the stalk.

Finally, you need to cut the stalk back about 3″ to 5″ for planting. I have seen others cut them smaller but for your first-timer, you may plant it as is. The reason why we cut them short is that there are fewer dead blades later to take out. Find a full sun area to plant them in. Yuma sun is harsh and we heat up for 3 months way into midnight and still, it feels like an oven outside but the lemongrass loves it.

For the rest of the lemongrass that you are going to use or give away cut the roots right against the stalk wash them, bag them, and freeze them. They freeze really well you can use them year after year and the taste and fragrance are still there. Same for the blades. I just compost mine.

Okay, this is the fun part. We get to play in the dirt.

It’s okay if yours doesn’t look like mine. Or have no shoots growing out of it. The single stalk is better because then, you don’t have to decide which way to plant it. With a Single stalk, place it in the dirt 1/2″ into the soil and watch it grow.

First, find a full sun spot to plant your lemongrass, measure 5 feet between every single stalk because they will turn into big bushes. For the smaller yards, it’s okay to plant them a foot away from the first one or plant them around your area. For container planting, one per container, and depending on how big your container is, it’s your call.

Lemongrass with starting shoots on them. Lay the lemongrass laying down maybe 45 degrees not standing up. Why? If you lay 3 or 4 of the lemongrass down it gives room for the new shoots to come up straight while the mother lemongrass dies for fertilizer. Which will use as an anchor root ball for next year’s harvest.

Then it’s up to you to have as many lemongrass patches as you want. I have only two patches and it’s enough for me. Good-looking lemongrass is almost 1 to 1.5 inches thick in diameter. That’s good harvesting. Mine has been 1/2″ in diameter only because I think it is too hot here. Just my opinion.

After the lemongrass replants use something to cover it from the sun for a couple of weeks until it takes off.

There are several different kinds of lemongrass. There are the ones you buy from the big box store that were planted from seeds. I have never known lemongrass to have seeds.

The other type is it has a red or burgundy stalk. This one is very fragrant and very good in boiled soup. These are the images here. They are smaller and have red roots.

There is one that has a green stalk and grows slower, is also fragrant, and is great in soup too.

The most different and should not be used as food is the flowering kinds. I only saw it once when I was in Junior High School. The flowering lemongrass looked like some fountain grass very pretty to look at but not to consume.

Store them up for future use

For the rest of the lemongrass that you are not going to plant rinse them. Let it drip-dry in another bucket or lay them on newspapers to dry. Bagging the lemongrass in the 1-gallon self-locking bag or grocery plastic bag. And put them in the freezer for future use.

If you want to use one or two, later on, you will have them. They freeze individually and it’s easy to take them out to use. If not, gently hit the frozen bag on the edge of the freezer or hammer, with gentle force, and it’ll all fall out individually.

You’ll never have to buy them ever again. You can also give them away as gifts as well.

Thank you for stopping by. If you got any questions please post them in my comment section and I will gladly answer your questions to the best ability. Go take on the day and challenge the unknown.

Share with your friends
blogs
| Tags: lemongrass, zbestgarden.com, zone 10a